San Francisco has done well to curb the virus and slow infections, but has been unable to escape a disparaging national trend. According to the CDC, Black and Hispanic persons are disproportionately affected by Covid-19. With only ourselves to blame, the infection numbers affecting the city of San Francisco have not hit all populations equally. Sadly, there was a latent response to help the cities most vulnerable which represented a racial disparity that demanded action.

Early on, the position of the City government showed that many vulnerable people ––citizens in high exposure jobs–– were left to their own devices. The racial disparities in the City spoke for themselves so community members and others rallied together and pooled resources. The collective innovation which followed can remind us all as to why the Mission is the center of worker action in San Francisco.

Even worse, Latinx residents accounted for at least half of those affected in the late summer. And as cases mounted, less than 10 percent of testing. Overall, only 14 percent of the tests were completed in communities representing 50 percent of the cases by early September. This was a situation that called for change.

With surging cases and many Latinx neighbors at high risk, advocates from around the city, centering around the Mission District, began to voice concerns.

Jon Jacobo, Head of the Health Committee for the Latino Task Force, questioned why the city did not bring resources to the vulnerable areas. He saw it as simple science to see who needed support. The city had almost 7 months to articulate an equitable response. Action from the city only came for the vulnerable once action was already streamlined.

Following a few months of inadequate response, District 9 Supervisor Hillary Ronen brought the disparity to the attention of the Board of Supervisors in late September. Soon after, free testing began being offered every Thursday at 701 Alabama Street in the Mission District. 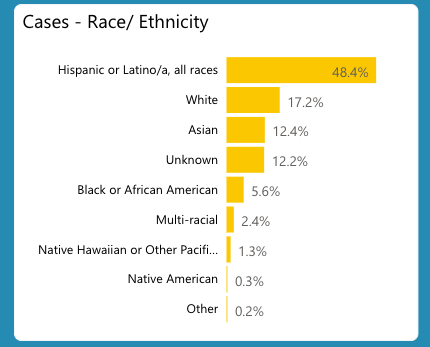 Testing continues as a collaboration between the San Francisco Department of Public Health and the Latino Task Force (LTF), which emerged in July to tackle socio-economic problems to Latinx community members. Along with LTF, integrated social groups work closely with families to help educate and prepare. These Community Wellness Teams hope to treat the whole person, making inroads on their psychological and economic health, and long-term needs such as primary care physicians.

The efforts have shown progress with the Hispanic/Latinx demographic with infection rates dropping down to 25% in the City as of November 12. This is a welcoming sign from a City that knows how. The most praise should be handed to the citizens who took action into their own hands exemplifying Hanna Arendt’s vita activa, where direct participation is the most effective form of political engagement.

The Task Force has been currently operating without any city funds. But an agreement of around $450,000 has been promised for one Mission organization to deploy COVID community outreach and care. At this time, there are two places to donate to places like the Latino Task Force’s Hub and the vulnerable population that it serves:

Born and raised in the East Bay, and a fifth-generation San Franciscan. He has studied and worked on three continents and lived in eight countries. Kyle lives and works in San Francisco.

San Francisco Board of Supervisors