The latest point-in-time count of people experiencing homelessness in San Francisco, conducted in January 2019, was 10,000. The City was due to have another count this month but deferred due to the pandemic. It’s likely that had this count occurred, this number would have increased substantially due to late implementation of the rent moratorium and continued evictions.

The City’s current homegrown strategy to address this public health crisis is known as Project Roomkey, a statewide initiative that housed residents of congregate shelters and unsheltered people who have tested positive for COVID-19 in vacant hotel rooms throughout the city, otherwise known as the “SIP Hotels.”

A logistical crux of Project Roomkey was that cities would receive near total reimbursement for the hotel expenses through FEMA, and on top of that, the City has also received about $61 million in additional funds from emergency funds allocated by Governor Newsom. FEMA’s funding required prioritization of certain categories of people to receive housing (referred to commonly as SIP Hotel Programs). These included individuals:

However, these categorizations don’t necessarily take into account the specific health implications of living unsheltered in a major city. Research in populations of unhoused individuals has shown trends of accelerated aging, in which “geriatric” health conditions present earlier in individuals due to imposed circumstances such as incarceration or, in this case, living without permanent shelter. This suggests that the minimum age should be decreased to at least 50 to remain consistent with epidemiological trends of chronic illnesses and functional limitations that present 15-20 years earlier in unhoused populations. Further, street living has been associated with higher rates of infectious diseases, such as HIV, Hepatitis B and C, and latent tuberculosis, all of which would further qualify significant proportions of our unhoused community members under  FEMA’s definition of “high-risk” individuals in need of immediate shelter in a hotel room.

We believe the City, and specifically Mayor Breed, have not done enough when at least 4,000 people still remain on the streets in the midst of the worst surge of the pandemic to date. The Board of Supervisors (BOS) already unanimously passed legislation to acquire 8,250 hotel rooms, a majority of which were designated for our unhoused neighbors to safely shelter in place, but Mayor Breed refused to sign despite the Human Services Agency announcing plans to lease 7,000 rooms for this purpose. To date, the City has only provided 2,300 of these hotel rooms to people experiencing homelessness, about 1/4 of the quantity mandated by the BOS legislation.

Many in San Francisco see this as the City abandoning its most vulnerable residents. Still, many detractors who oppose housing unsheltered San Franciscans claim that this program is a financial burden, but it’s clear this expansion effort would qualify for FEMA reimbursement. which has just recently been guaranteed through September by the Biden Administration.

In addition to FEMA reimbursement, the City also has a newly designated fund to provide relief to people experiencing homelessness from the passing of Prop C—roughly 300 million dollars are available for the purpose of housing unsheltered residents following the first distribution of these funds earlier in the pandemic. Recognizing that the SIP hotels were not intended to be a long-term solution, San Francisco residents have also been calling on the City to rapidly expand the availability and accessibility of permanent supportive housing with a housing-first approach. To date, only 59 SIP hotel residents have been transitioned to long-term supportive housing. That number represents 18% of all residents that have exited SIP hotels. For reference, 5% of exits were attributable to residents dying.

A variety of local organizations are challenging the city to provide basic services to its residents but one group of organizers, dubbed Hotels Not Hospitals (HNH), has been partnering with residents living on the street in order to reallocate community-raised funds towards housing. With nearly a year of experience running their pandemic housing program, they have seen how important housing is to community health. HNH is community-funded via GoFundMe and is currently raising money to continue their work. A representative from HNH said “we’ve seen how quickly bureaucratic red tape can disappear in times of crisis and we are calling on the City to prioritize the lives of its most vulnerable residents—those living unsheltered through the winter months in the midst of a deadly pandemic. This pandemic has shown that we are all only as healthy and safe as the most vulnerable in our city, and to refuse fundamental care to them harms us all. San Francisco has the rooms and the City has funds, all that is needed is action from Mayor London Breed.” 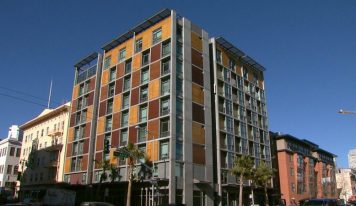 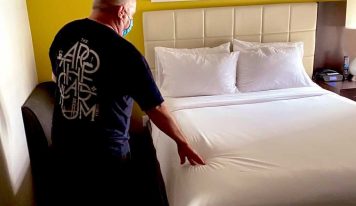 Where SF City Fails to Help the Unhoused, ‘Hotels Not Hospitals’ Steps Up