“When the San Francisco Unified School District (SFUSD) decided to adopt the EmPower system back in January, they knew there would be issues with paying people,” said Dante Popalisky, a math teacher at George Washington High School.

Yesterday, the San Francisco Movement of Rank-and-File Educators (SFMORE) staged a walkout at multiple school locations and a rally in front of the school district office at 555 Franklin. Over 3,000 SFUSD employees filed help tickets related to their pay, which has been inadequate since the adoption of the EmPower system.

Over 200 educators filled the entire block of 555 Franklin to form a picket line with signs saying “Cancel EmPower Now,” “Pay Employees, Not Consultants,” and “Pay Our Teachers.”

Chris Clauss, a special education teacher at George Washington High School, spoke at the rally and shared how another teacher, a new parent, took COVID sick leave over the summer and was paid less than 20 cents per hour.

“You can’t buy diapers for less than 20 cents. It took until October for their pay to be fixed.”

In September, the SFUSD hired consulting firm Alvarez and Marsal to fix the payroll fiasco without putting the matter to a public bid, giving them a contract worth up to $2.8 million. The firm has a controversial history in this area. When its contract with the Guam Department of Education (GDOE) was set to expire in 2016 and Alvarez and Marsal finished second in the bidding process for a new one, the firm filed an appeal and effectively stalled the Department’s attempts to hire a successor. The SFUSD cited time constraints in its decision to skip the customary public bidding process.

Popalisky shared that over 150 grievances were filed by SFUSD employees related to EmPower, and that he’s frustrated with how the SFUSD is handling the ongoing payroll issues with Alvarez and Marsal. “They’ve had months to fix this issue. To them, the solution is just to shell out more money to another private consultant, which isn’t working.”

Attendees of the rally also held a candlelight vigil for Eddy Alarcon, a paraeducator at James Lick Middle School who died in early September. According to a media release by SFMORE, Alarcon’s health benefits were canceled despite still being employed. Photos of Alarcon were taped along a railing at 555 Franklin and by a window next to the main entrance decorated with marigold flowers and candles.

Roberto Peña, another SFUSD employee, asked for a moment of silence for Alarcon while holding up a portrait of him and a marigold flower.

“We all love our jobs, but love doesn’t pay the bills. We remember our heroes, our parents, our students, and our educators. And some of them are not here because of EmPower. This cannot happen anymore.”

Eugene Pearson, a science and health teacher at Phillip & Sala Burton High School, marched along the crowd in a costume, holding up a sign saying, “SFUSD has canceled my health insurance TWICE this year, caused me to owe $3,300 in taxes and penalties, and paid me only 40% of my August pay.”

“I’m a union employee, and I’m pissed off for myself and on behalf of my colleagues who haven’t gotten paid at all,” he said.

Pablo Portillo, a 5th-grade teacher at Dolores Huerta Elementary School, also shared how a few of his colleagues struggled as new parents due to no pay.

“Since January, my colleagues have not gotten paid. Two babies have been born with no insurance. And what did SFUSD say? ‘We’re working on it.’ They want food. They need a place to live. Those things are due, so we cannot wait now. We need these things fixed now.”

He also shared that another colleague cried to him after not getting paid because her rent was due. He offered to lend her money, hoping to cover for her where the payroll system would not.

Superintendent Matt Wayne was in attendance but requested a meeting with the educators inside the district office. They refused, arguing that this was no longer up for negotiation and that the EmPower contract must end.

“[Superintendent Wayne’s] top priority was to get public money out of the school district and give it to a private firm — he advocated for that,” said Popalisky. “I was taken aback by how doing this was the only solution for him. The idea of canceling the EmPower contract was under no circumstances up for discussion.”

Savannah is a freelance writer and photographer, organizer, and San Francisco resident. She (or they) covers actions, police, and labor for SFIJ. 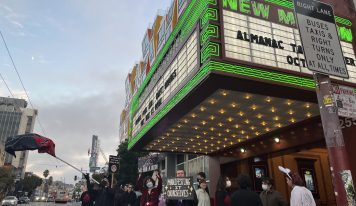